Albuquerque, N.M.– A new report by Dēmos, in collaboration with the Center for Civic Policy (CCP), presents data suggesting a real possibility that an enhancement to Albuquerque’s current public financing program will free local elections from direct influence by big donors and special interests.

In the report, Dēmos and CCP expose the role of big money in Albuquerque politics, examine the demographics of the donor class in relation to the city’s residents, and make the case for Democracy Dollars as a solution to give more power to the people. Key findings from the report include:

While public financing programs have been successful across the country, and in Albuquerque, a 2011 Supreme Court decision weakened such programs, leading to a decline in participation in Albuquerque’s program, particularly in mayoral races.

“Candidates at every level of government need an alternative to our big-money system that will allow them to successfully compete while relying on financial support from the vast majority of constituents who are not wealthy. In dozens of states and localities across the country, small-donor public financing has proven to be the best solution both to limit big money in politics and to give regular people a louder voice in our democracy,” said Laura Williamson, Dēmos Senior Policy Analyst.

Albuquerque’s current public financing system was approved by 69 percent of city voters back in 2005. The reason: voters believed this was a way to reduce the influence of large campaign donors on elections and decision-making for candidates running for City Council or City Mayor.

“The city of Albuquerque has a unique opportunity to continue to lead in the rising movement to get big money out of politics,” said Oriana Sandoval, CEO for the Center for Civic Policy. “In just a few weeks, Albuquerque residents will have the opportunity to vote for a democracy reform initiative that will break up big donors’ political monopoly and end their stronghold on our political system and our elected officials”.

Currently, candidates seeking to use public financing for their campaign must meet a series of requirements to qualify, including collecting $5 donations from at least 1 percent of registered voters in the council district or city (if running for mayor). Once qualified, these participating candidates who reject large campaign checks currently receive a stipend. With the addition of Democracy Dollars to the program, these candidates could also collect a limited number of $25 coupons from local supporters, as provided by the city.

Democracy Dollars will be on the back Albuquerque’s Nov. 5 ballot under the title “Proposition 2”.

In 2018, in an effort to enhance the city’s existing program, a community-led campaign succeeded in collecting approximately 28,000 petition signatures from Albuquerque voters to put a proposal on the ballot to modernize the program and help candidates keep up with the rising costs of campaigns.

The proposal would give qualified Albuquerque residents $25 coupons they can donate to the candidates of their choosing, if those candidates qualify for public financing. By making more residents potential donors, Democracy Dollars would give candidates the freedom to run without big money and a reason to get out and talk to all constituents.

The program would democratize the city’s elections and policy making process by giving more residents an outlet to have their voices heard, and making candidates more accountable to everyday people.

A link to Dēmos and CCP full report can be found here.

Based in Albuquerque, New Mexico, the Center for Civic Policy (CCP), a nonpartisan tax-exempt 501c3 organization, works to amplify the voices of New Mexicans in policy decisions that affect their lives and to hold NM officials accountable –achieving the kind of change that builds thriving New Mexico families.

Dēmos is a public policy organization working for an America where we all have an equal say in our democracy and an equal chance in our economy. Our name means “the people.” It is the root word of democracy, and it reminds us that in America, the true source of our greatness is the diversity of our people. Our nation’s highest challenge is to create a democracy that truly empowers people of all backgrounds, so that we all have a say in setting the policies that shape opportunity and provide for our common future. To help America meet that challenge, Dēmos is working to reduce political, economic and racial inequality, deploying original research, advocacy, litigation, and strategic communications to create the America the people deserve. 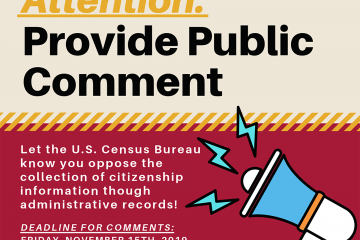