Albuquerque’s beleaguered public financing program could become more attractive to people running for mayor or city council if a proposition before voters in next week’s election is successful.

The changes would boost the amount of money going to mayoral candidates whose campaigns qualify for public money. Plus, Albuquerque residents would be allowed to direct additional money to mayoral and city council candidates of their choice, in $25 increments.

The proposal is being heatedly debated in the final days before the election. Detractors say the program will cost Albuquerque a lot and favor incumbents or other candidates backed by organized groups with resources to help them.  Proponents say public financing, including this effort to strengthen Albuquerque’s system, would help diminish the influence of money on politics, and encourage more people to run for office.

Problem in search of a solution

The proposal would update Albuquerque’s original  public financing program for mayoral and city council candidates created in 2005 with high hopes of decreasing the influence of private money in elections.

The current system requires candidates to demonstrate they have some measure of community support before receiving public money, through gathering qualifying contributions and signatures from a certain percentage of voters. Not every office seeker qualifies, but for those who do, the city pays out $1 per registered voter in their district. For mayoral candidates, it’s $1 per voter in the city as a whole.

Since then, while many city council candidates continue to use the program, most mayoral hopefuls have shunned public financing, and significantly out-raised their publicly financed opponents.

In 2017, Mayor Tim Keller was the only mayoral candidate to use public financing, and his top competitors raised more cash than the city gave him. He won anyway, most likely helped by deep political roots, name recognition and spending by an independent PAC that supported him.

But Keller was an anomaly. Not all candidates running for mayor enjoy those benefits.

The ballot proposition before voters would increase the initial amount of money mayoral candidates get at the outset, from $1 to $1.75 per registered voter.

Plus, mayoral and city council candidates alike could pad their campaign coffers by collecting $25 vouchers from residents that would be redeemed by the city.

Albuquerque would mail residents the vouchers and those residents could then sign them over to a publicly financed candidate. They could choose to not give them to any candidate, as well. The candidate in turn would present the voucher to the city to receive the $25.

Candidates would be limited to doubling their money using the voucher money. Once they raised the limit, they’d no longer be able to redeem additional vouchers.

The coalition of groups who gathered signatures for the ballot initiative named the vouchers “Democracy Dollars.”

Proponents say public financing allows candidates to spend their time talking to voters rather than big donors. Campaign finance records show big donors contribute the great majority of money going to privately funded candidates. The $25 vouchers would encourage candidates to meet and talk with many more Albuquerque voters, they say.

The vouchers would level the playing field and reduce the influence of “how money dictates the agendas for local and national politics,” said Isaac De Luna, communications director for the Center for Civic Policy, one of the organizations that gathered signatures.

But while supporters tout the potential of the vouchers to bring more people into the political system through Democracy Dollars, Pat Rogers, a local attorney and former member of the Republican National Committee, contends the vouchers would actually prop up entrenched incumbents or other candidates who have the backing of organized groups.

The only people who will benefit, Rogers said in an interview on the New Mexico PBS public affairs program New Mexico In Focus, are those with the “ability to command armies of people to harvest these democracy dollars.”

And Paul Gessing of the Rio Grande Foundation, a local Libertarian-leaning think tank, complained about the lack of definition in the ballot initiative of which residents will be mailed the vouchers.

“The definition of resident is left wide open,” he said, “so we don’t know who will get democracy dollars. Children? Illegal immigrants? Felons? All of the above?”

If the proposal passes, the City Council would decide who eligible voters are, executive director of the Working Families Party New Mexico Eric Griego said during an interview on New Mexico In Focus. The proposition directs the city council to create an ordinance with details of the new program if it passes.

Griego has confidence that the council would do the right thing if voters endorse the idea, he said. He also disputed the notion that only people with “armies” of volunteers would benefit from the vouchers.

“It invites people…to think about actually running, whether or not they’re rich, or have a huge network or have a huge name ID. It becomes viable now for more people,” he said on New Mexico in Focus, adding if they “work hard, they don’t have to take a bunch of corporate money” to be competitive.

Griego, a former state senator and Albuquerque city councilor, has a long history on the topic. He was the sponsor of the original legislation passed in 2005 that created Albuquerque’s public financing program.

How will city pay for $25 vouchers?

The city’s public financing fund is fueled by one-tenth of one percent of the annual city budget, plus other sources of revenue, including the money candidates have raised in initial small contributions to qualify for the public financing program. Any left over money in the fund stays there rather than being put back into the city general fund. As of June 2018, there was a little more than $3 million in the fund.

Gessing said the democracy dollars would be an enormous cost to the city, echoing a similar complaint from other critics.

“It’s going to be very expensive for the taxpayers in the city of Albuquerque to provide the funding for another form of public financing,” Gessing said.

The new program would lead to a significant increase in the amount of money distributed if just one mayoral candidate used public financing. For instance, using 380,000 registered voters as a base of voucher holders, one mayoral candidate would have approximately $665,000 to work with initially, made up of seed money the campaign had collected and what the city disburses once they qualify. The candidate would then be allowed to collect up to $665,000 in vouchers if she or he could persuade enough Albuquerque registered voters to sign their coupons over.

That’s $1.3 million per mayoral campaign, versus $380,000 without the voucher program. That amount of money would allow the candidate to be competitive with an entrenched incumbent like Marty Chavez in 2005 or Richard Berry in 2013. But most privately financed candidates in 2017 did not approach that amount. In order to collect the $665,000 in voucher money, however, publicly financed candidates would have to gather 26,600 vouchers. That’s a lot of people to persuade. In fact, it’s more than 70% of the people who voted for Tim Keller in the 2017 general election. So it’s not assured that the publicly financed candidate would be able to collect the maximum in voucher money.

Supporters argue the current funding stream can handle the increased payouts, noting that its creators had expected larger payouts than are being given out because of the matching provision. That’s why money has been collecting in the fund since 2011.

But if the fund did go bust, they say, the benefits of public financing would be worth additional funding.

“That means more people are trying to use publicly financed campaigns that forces them to really connect with the people of Albuquerque,” De Luna, of the Center for Civic Policy, said.  “We would just need to revisit the funding formula and perhaps increase the budget allocated with this instead of looking at other options.”

There are more changes to Albuquerque’s public financing statute voters will get to decide on as well, but those are in a separate ballot question. They include allowing unlimited in-kind donations for office space and for legal and professional services specifically to help a candidate navigate city election and ethics laws, and setting the in-kind contribution limit per donor to $2,500. Publicly financed candidates would be able to raise more seed money to begin their campaigns. But they’d be disqualified if they raised and spent campaign money prior to the election year that exceeded the amount allowed during the initial “exploratory period.”

This article first appeared on New Mexico In Depth and is republished here under a Creative Commons license.

Categories: In The News 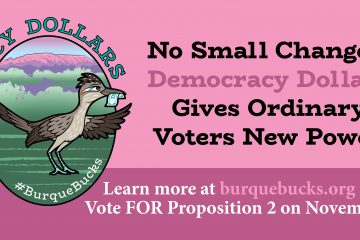 Democracy Dollars good for government By Oriana Sandoval, CEO Center for Civic Policy Friday, November 1, 2019 What’s a more inclusive democracy worth to us? Is $25 too much to ask for a people-centered campaign Read more…